Useful information about this German brand

The birth of Mercedes

The well-known Mercedes Benz brand is a German manufacturer of luxury cars, but trucks and city buses, for example, are also produced by Mercedes. MB is part of one of the biggest players on the worldwide car market, Daimler AG. This brand is known for its good quality and luxurious design, which is also reflected in the Mercedes slogan, 'The Best or Nothing'. It is one of the best-selling brands in Europe, but the Mercedes is also a popular car outside Europe. On this page, besides the history, you can also find information about tyre pressure, engine oil and maintenance intervals. 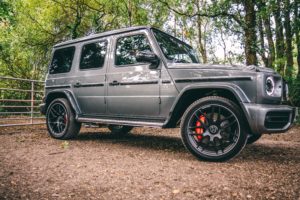 Mercedes Benz was founded in 1926 as a result of a merger between Gottlieb Daimler's Daimler Motoren Gesellschaft and Carl Benz's Benz & Cie. The history of Benz & Cie. goes back to 1885, the year in which Carl Benz built his first car as the world's first official automaker. The patent for this 'motor car' was granted in 1886 and it was built in Mannheim. Later in 1886, Gottlieb Daimler built his first car, which was not the first car, but the first car with four wheels (Benz's had three wheels). Daimler then founded the Daimler Motoren Gesellschaft in collaboration with engineer Wilhelm Maybach in Cannstatt, a suburb of Stuttgart. Daimler began producing cars in 1903 under the name Mercedes, named after the daughter of the Austro-Hungarian consul Emil Jellinek, one of the company's most important customers at the time. In the 1930s, Mercedes Benz was a very popular brand in Germany. The car was considered a reliable vehicle during the Nazi era. After the Second World War, the brand was overtaken by numerous discoveries and innovations, which gave it a reputation as one of the world's best car manufacturers. Quality is paramount at all times for Mercedes and this is reflected in independent quality tests, which show that the brand consistently performs above average. Figures also show that Mercedes-Benz vehicles have very few recalls. The best or nothing!

Mercedes Benz has many different models available and, according to connoisseurs, has one common characteristic: quality. They are therefore expensive but high quality cars. If you are looking for a 2nd-hand Mercedes, you can indulge yourself, as there are many 2nd-hand models for sale on the Dutch (and German) market. There is the compact A-class, the popular C-class or the luxurious E-class. But also the EQS or the powerful G-Class are among the models. There is something for everyone!

The overviews below show service intervals, engine oil requirements and tips for the most recent Mercedes models. The intervals and guidelines are only an indication, there may be circumstances in which a garage gives a different recommendation.

Do you have a Mercedes and wonder whether it has a timing belt or a timing chain? Most Mercedes cars have a chain and therefore no timing belt. Only the following models have a belt:

When to replace a Mercedes timing belt

Do you have one of the aforementioned Mercedes models with a timing belt? Make sure that the belt is replaced on time. If the belt wears out and snaps, you are further away from home, so replace the belt preventively! Look in the service book of your Mercedes A Class if you can find information about the last replacement date. If not, see if there is a sticker under the bonnet with the last date or mileage when the belt was last replaced. If you do not know when the belt was last replaced and cannot find a sticker, it is wise to have the timing belt replaced immediately.

When to replace Mercedes timing chain

That a distribution chain lasts a lot longer than a belt should be clear, but a chain can also cause problems. In general people say that a chain can last up to 300,000 km but in practice it can happen that the chain stretches which can cause a rattling noise. So it is important to have the car checked regularly and to inspect the chain properly during the maintenance to prevent possible problems and damage.

For popular Mercedes models, we have listed the known problems and buying advice. Click on the links below to read on!